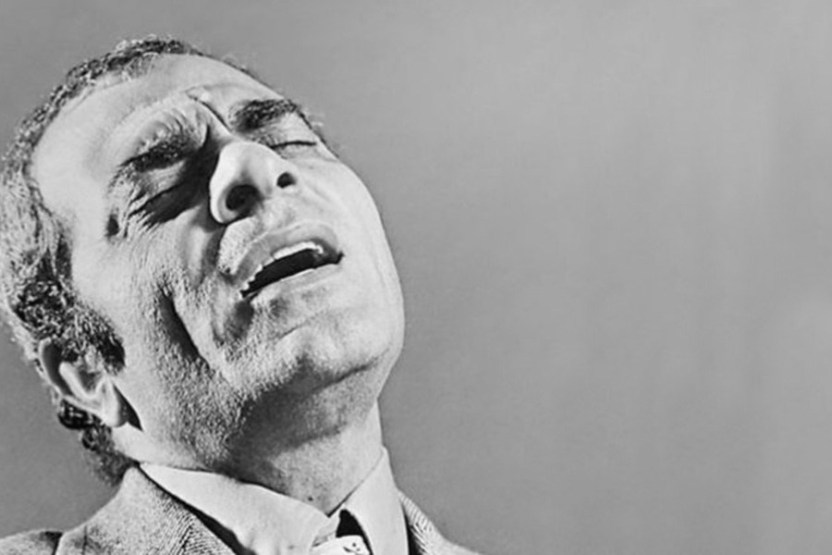 He was born on August 29, 1931 in Nea Ionia, Attica and was the son of Charalambos Kazantzidis, originally from Kotyora (Ordou) of Pontus and Gesthimani (Hatzidaina), originally from Alagia in southwestern Asia Minor. His father was a builder by profession and during the years of occupation he organized in the ranks of ELAS and worked for the Rebel Chamber (ETA). During the years of civil war he was assassinated by parastatal anti-communists.

The teenager Kazantzidis (13 years old) was forced to work in various jobs.

The first person to appreciate his voice was one of his bosses, who as he listened to him at work, gave him a guitar. Kazantzidis’s teacher was Stelios Chrysinis, a blind composer.

In 1952, Kazantzidis made his record debut with a song by Apostolos Kaldaras. This song was titled “I go for a bath”. It was a song written about the heat that prevailed that summer in the capital. The album did not sell because it imitated the voice of Prodromos Tsaousakis and the career of Stelios Kazantzidis would fade before it even started. The one who realized the possibilities of Kazantzidis’ voice was the composer Giannis Papaioannou. His song The Suitcases becomes a great success and the Kazantzidis phenomenon begins to take shape.

In October 1965, Kazantzidis, Marinella and Manolis Angelopoulos prepare concerts, which will not take place, since a few months later Kazantzidis made the big decision to stop live performances in centers. The reason is his disgust for the situation that prevailed in the nightclubs. Typically, Marinella mentions that only in the shop where Kazantzidis worked was it forbidden (by him, of course) for the singers to sit at the tables of financially strong customers. Kazantzidis’s departure from the stage, “… is the most dramatic form of silent protest against a relentless system of entanglement by newly wealthy patrons, discography bosses and bravos of the night …”.

After the change of government, the album “Stin Anatoli” was released, with music by Mikis Theodorakis. It included great songs, such as: “Apones Exousies”, “And no one spoke”, “In the East”, but they were not heard as much as they should have been. In 1975 came “I Exist”, in collaboration with Nikolopoulos and Pythagoras and George Dalara to silence. In the busiest and strongest discographic moment of his career, Kazantzidis retires from the recordings. His fight with Minos took on pan-Hellenic proportions. Finally, in 1987, by special legislation, he was released with MINOS. The next album – in “MINOS” – entitled “On the way back”, exceeds sales -only in the Greek market- 400,000 thousand

Kazantzidis with Marinella and the football player Mimi Papaioannou arrive in Germany for concerts. The reception reserved for them by the expatriates is touching. With them is the young -then- bouzouki master Christos Nikolopoulos. At the same time, Kazantzidis and Christos Kolokotronis (music and lyrics respectively) created the AEK anthem sung by Papaioannou: “Win, win”.

In 1959, Kazantzidis had a legal dispute with the record company COLUMBIA, on the occasion of the large sales of the song “Mantoumbala”, record sales, which at that time reached 100,000. The other side of the same album includes “Life has two doors”, with music by Kazantzidis himself and lyrics by Eftychia Papagiannopoulou. Despite the unprecedented sales and the fact that the company was making millions from this particular record, the singer himself got less than 1000 drachmas. This happened as the singers were then paid a lump sum for each record and did not receive sales percentages. Kazantzidis owes a lot to contemporary singers, since he was the first to claim percentages for his industry and his effort had a positive result.

In 1969 he decided to retire from the discography for about two years. That is when he makes the effort to create his own company, “STANDAR”, but the established interests and censorship in the years of the Colonel’s Junta do not leave him. The same fate befell any other business moves, such as the breeding of frogs, the ouzo “I exist” that was released later, etc.

At the end of 1975 comes the album “I Exist”. Christos Nikolopoulos and Pythagoras sign the departure of Stelios from the discography for twelve years. In 1988 his mother, Gesthimanis passed away. Following is the “Free” album on Polygram. His records go gold and platinum making record sales.

In 1982 he married Vasso Katsavou.

He died on September 14, 2001, at the age of 70, after a long battle with cancer. His burial took place in the Cemetery of Eleusis, next to the tomb of Gethsemane’s mother, as he wished, while his funeral became a popular pilgrimage by thousands of admirers.