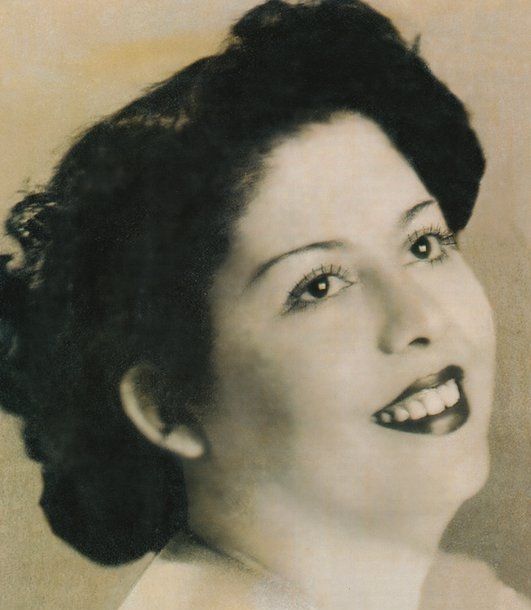 Marika Ninou was of Armenian descent and her real name was Evangelia Atamian. She was born in 1922 on the steamer Evangelistria carrying her mother, her two sisters and her eight-year-old brother Barkev Atamian, from Smyrna to Piraeus]. She came out of her mom’s belly bruised and, because they thought she would not live, they took her to a warehouse. But she met, survived and was immediately baptized by the captain of Evangelistria and that is why she was called Evangelia.

In Greece, they settled in Kokkinia, at 50 Megaron Street. At the age of 7, Evangelia Atamian was enrolled in the Armenian school of the Armenian Blue Cross “Zavarian”. In fact, her teacher urged her to learn the mandolin, which she did, and eventually joined the school orchestra. It seems that her vocal skills showed very little, since as an elementary school student she was still invited to the Armenian Church of Agios Iakovos in Kokkinia to sing in the services of Holy Week.

In 1939 she married her compatriot Hayk Mesropian, who was a locksmith and had a shop in Kokkinia. In 1940 their son, Ovanes, was born, but the couple divorced and in 1946 Mesropian left for Armenia.

But already in 1944, and after her separation, Ninos had met the acrobat and charismatic Nikos (Nino) Nikolaidis. At first Marika worked at the box office, but then they became with Nino an artistic acrobatic couple named Duo Nino and toured. Later they got married and became Evangelia Nikolaidou. Nino’s mother, a theatrical actress, gave her the name Marika, because she referred to Marika Kotopouli. The surname Nino came from Nino the acrobat and, thus, Evangelia Atamian became Marika Nino. In 1947, her son, Ovanes, joined the band, so it was renamed Diomisi Nino. In their performances, Marika did not sing any folk songs.

Once they were invited to the port of Salamis to do acrobatics. At one point, the admiral, who really liked Turkish songs, asked Ninos to hear one. Nino hesitantly sang a Turkish song that she knew from her mother, the admiral was very pleased, but the one who was excited by her voice was the person present in the room, Petros Kyriakos. He met her in Manolis Chiotis, who debuted her in June 1948 with the songs of Hours I Peek and I Will Tell You My Secret.

In October 1948, Stellakis Perpiniadis took her with him as a singer in the Florida center of G. Melitias on Alexandras Avenue. Perpiniadis had met her in the recording studio when she was recording Chiotis songs. In November 1948, Marika Ninou made an album with Giannis Papaioannou and specifically the song To ‘fages To Paidi. In 1949 Ninos first sang songs by Giorgos Mitsakis and in October of the same year she recorded Vassilis Tsitsanis ‘Gia Ta Matia P’ Agapo.

Nino stopped from Florida because she considered the 25 drachmas she received for a living to be small and, when she asked them for an increase, they did not give it to her. But she was lucky, because just then Tsotanis left the band in the tavern of Tzimis tou Chondrou at 77 Acharnon Street, Sotiria Bellou and Ninou took her place with 90 drachmas. With Ninos in Tzimis tou Chondrou, Tsitsanis has said that the queue of people in front of the store reached Agios Panteleimon.

Although Nino’s collaboration with Tsitsanis was short (since it was always done on vacation, due to fights due to characters), it has gone down in history as magical and legendary. From her appearances in the tavern of Jimmy the Thick, a recording was released in 1977 on an album, which was made there with a tape recorder in 1955, by an amateur. In the note on the cover of this album there are many inaccuracies about her life while her Armenian origin is also hidden.

In October 1951 he made some appearances in Istanbul with Tsitsanis and Evangelia Margaroni in the center of Casablanca, where they were adored. Their reward was three gold pounds for Tsitsanis, two pounds for Ninos and one for Margaroni. With what she gathered in Istanbul, she began to build her house in Egaleo.

Marika Ninou successfully sang some of the so-called archontorebetika, which she transformed with her voice and made them sound rebetika and so she passed them on to other social strata. In 1954 he was diagnosed with uterine cancer. He then decided to go to the United States for two main reasons. The first reason was to sing and thus be able to support the family of four of her brother, Barkev, who also suffered from cancer, as well as her son, Ovanes, since the profits in the USA. from the song were very big. The second reason was to try the best treatments he had ever heard there. In the USA. went again in 1956. Then Marika Ninou was helped for hospital expenses, doctors, tickets, even for clothes, Rena Dalia and Costas Kaplanis.

Before going to America, he had undergone cancer surgery in Athens, but in America there was a rapid metastasis. He returned to Greece, where he worked for a while with terrible pains and finally died on Sunday, February 23, 1957, at the age of 35 [1] [4]. She was buried in Schistos, Naples, next to her brother, Barkev Atamian, who had died in 1955. There are neither their graves nor their bones. There are several photos of her, three appearances in black and white movies, performing songs and a few clothes kept by her niece (her brother’s daughter) Gula Atamian-Anserian.

The life of Marika Ninos inspired the script for the film of Costas Ferris, Rebetiko of 1983.

Manos Hadjidakis wrote about Marika Ninou, dedicating the album of Perix (1974) to her: “All this work is dedicated to the memory of the unique Marika Ninou, who without knowing it, with the knife of her voice, carved deep inside us names of gods of humility and Byzantine decline “.

Panos Geramanis, in a tribute he made to Ninos in 2003, said the following: “The presence of Marika Ninos marked a new era in the interpretation of folk song and at the same time established a new perception on the stage of the popular centers of his time.” 50 “.

George Papadakis wrote about Ninos: “As the harsh, hoarse and sloppy voice of Markos Vamvakaris portrays the man of the rebetiko of his time, so Nino’s voice implements the female character in the songs written by Tsitsanis in those years, the Papaioannou, Mitsakis (…) Singing, he paints well-known and familiar in the wider area of ​​bourgeois popular society female characters “. Vassilis Tsitsanis has said, among other things, about Ninos: “He had a special interpretive ability, he had something else. When he sang he literally captivated the people. He sang and taught along with the song, like the teacher who teaches the students. This was innate “He was born for the stage.”

In the 78 rpm discography, Marika Ninou recorded 174 songs, of which one third belongs to Tsitsanis and the rest to 20 other Greek composers. At 119, of these 174, he sings first voice, while at 55 he sings second. He also left 9 songs by Tsitsanis recorded in the summer of 1954 in the Parnassos Hall by a French crew, as well as 11 songs live at Tzimis tou Chondrou in 1955.

Of the 119 songs recorded by Marika Ninou on 78 rpm records, 34 were recorded by His Masters Voice, 37 in Columbia, 8 in Odeon, 6 in Parlophone, 12 in Melody, 20 in Liberty America and 2 in Apollo Australia. The following dates are probably very accurate, except for the 20 songs of Liberty America, which is why they are listed separately.