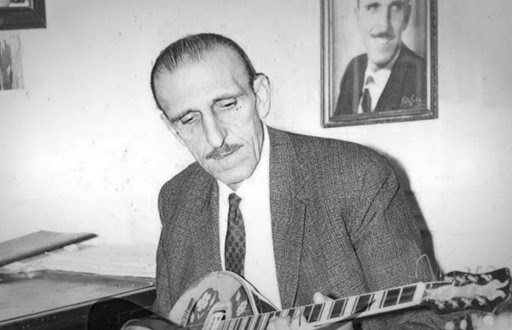 He was born on January 18, 1914 in Kio, Asia Minor, at the age of two he was orphaned by his father, while six years later he lived through the Asia Minor Catastrophe. He settled with his mother and grandmother in Samothrace but a little later they moved to Piraeus, specifically to Tzitzifies. From an early age he worked as a fisherman, carpenter, in a car repair shop and in construction and stopped going to school early. It is also noteworthy that in the pre-war years he was a football player, playing as a goalkeeper in the team of Faliriko Association. He was a best man and a close associate of Vassilis Tsitsanis.

He first appeared professionally next to Markos Vamvakaris and Stelios Keromytis in 1937. His first song was Faliriotissa which was released on an album and was a huge success. This was followed by many others who have his lyrics, his music or both, among which are: Captain Andreas Zepos, Five Greeks in Hell, Opened, opened, Modistroula, Feast life, I walk and talk, Before dawn, How the night will pass, Turn off the light to sleep, etc.

In general, the songs of G. Papaioannou are characterized by an alloy of chant, ball and sounds from Asia Minor. He is considered the first, in the folk rebetiko song, to use in his recordings the so-called “primo sekondo” (disagreement).

Giannis Papaioannou was the first Greek folk composer to travel to America, in 1953, to sing to Greeks abroad. After his return, he remained a permanent collaborator of Vassilis Tsitsanis. In his place he had the nickname Psilos or Patsas.

He was killed on August 3, 1972 at the age of 58 in a car accident in Neo Perama, driving early in the morning on his way to his holiday home in Salamina and was buried in the cemetery of Kallithea.